What's that buzzing? That is our first bee colony in our sanctuary. Two colonies moved in a few days ago. However, we have already been preparing for them for a few weeks. In January, we already had the idea to make our sanctuary home for bees. We were able to get an experienced beekeeper from the region to help us get started in beekeeping. He will teach us everything we need to know about beekeeping for at least a year, week after week. Four colleagues from our team are trained to become beekeepers.

Marei Willenborg is not only our chief animal caretaker at BEAR SANCTUARY Müritz but also one of our budding beekeepers. How good that Marei also enjoys writing texts! She will write our new bee blog and take us all on an exciting journey into bee life. Marei studied wildlife management - bees were naturally part of her studies.

"I found this topic incredibly exciting, but beekeeping offers another, completely new perspective on bees." 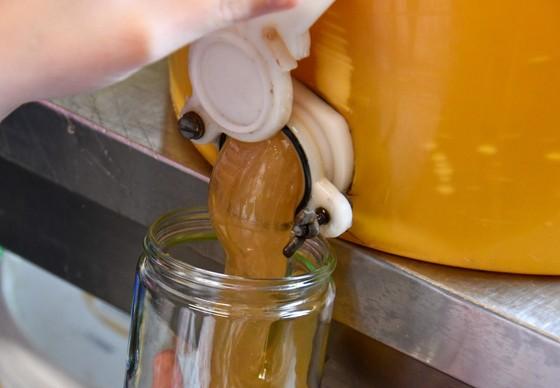 Spinning honey is a tedious business - especially if you're doing it for the very first time, as we were. But eventually, we got the hang of it, and over 40 kilograms (!) of honey had been spun and initially filled into large buckets. After vigorous stirring in the buckets to help the honey achieve a creamy consistency, the honey was finally filled into jars. Yum! But best of all, each and every member of our BEAR SANCTUARY Müritz team got to take home a jar of honey. Tasting the honey was something very special - because never before has there been this delicacy from real BEAR SANCTUARY bees. 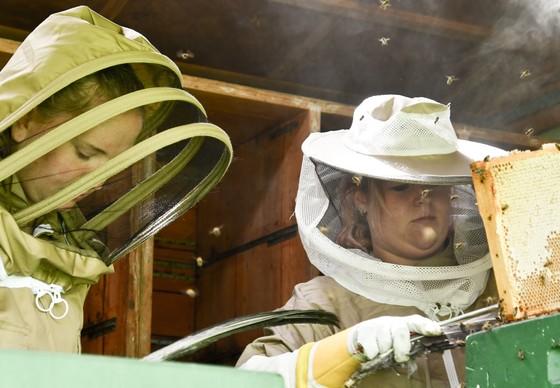 Mmmmmh, how delicious is that?

We have waited a long time for it and today it was finally so far: our first honey! Well, almost anyway. It was time for us to collect the honey chambers of the bees, uncover the combs and separate the honey from them with a centrifuge. The result was our very own Bärenwald bee honey. Even though we were all busy licking the honey, it still needs a little time until it is really "ready". Because for the next two days, it needs to be stirred in the morning and evening before we can transfer it into the jars and enjoy it. Small spoiler: The honey tastes wonderful. 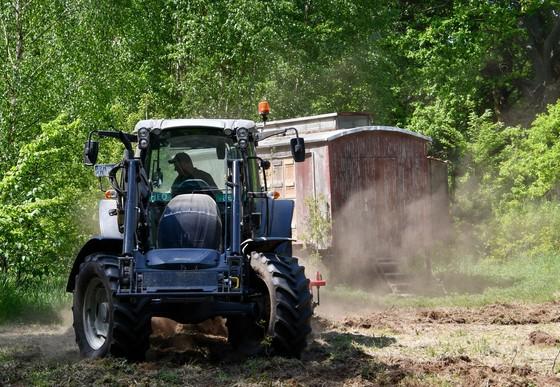 Blossoms for the bees

We are very glad that we have already taken care of four bee colonies within a short period. Our bees are busy at work and fly out into the great nature in and around the BEAR SANCTUARY. We are not worried that the bees might not find enough pollen and nectar, but we want to make their work much easier. So flourish the area with lots of sunflowers next to our bee truck is our further goal. The soil was prepared by our colleague Theo, and soon 20 kilograms of sunflower seeds will go into the ground. Keep your fingers crossed that it will bloom yellow shortly! 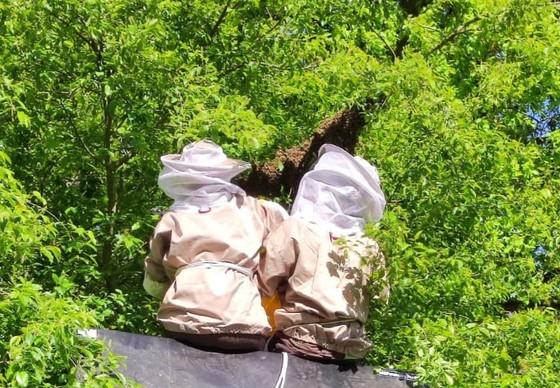 Our beekeepers now had to prove their knowledge about capturing a bee colony because part of a colony had swarmed. The swarming of bee colonies in spring is a natural process. They want to form a new swarm for reproducing themselves. That is the reason why they split off from the original colony living in the hive. The old queen swarms and takes this part of the colony with her. The new queen, which has grown up in the hive, stays in the original place.  She begins to lay her eggs there. If you miss the proper moment to catch the swarming colony, it will settle anywhere in the wild. If you can capture it, it will get its own hive to start producing honey. That is the theory so far. In practice, our colleagues had to spend several hours catching the colonies that had swarmed. However, the effort was worth it: we now have four colonies in total. Lots of work for our beekeepers! 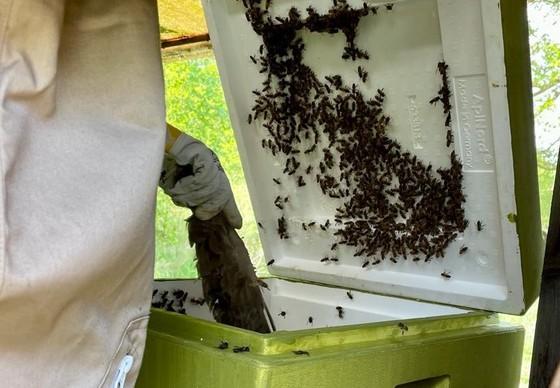 Relocation mastered in no time

To be honest, after it was not so easy to capture the bee colony in the sanctuary, we were afraid at first that the relocation of the captured bee colony could become complicated. But the action went much easier than expected. Secured by a tension belt, the bee colony could be brought from the sanctuary to our bee truck with the help of a buggy. Our beekeepers were relieved that the transfer from one hive to the new one went smoothly without complications. As soon as the new bee colony moved into the beehive, the busy bees started searching for nectar and pollen. 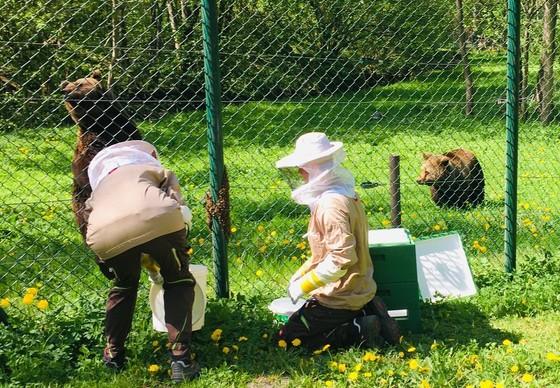 What a surprise! Visitors told us that a bee colony had strayed into our sanctuary. We have to admit when we heard that news our nervousness increased immediately. Is it possible that one of our bee colonies has swarmed? However, it also could be a colony from a beekeeper in the neighbourhood. Our main concerns were if we as young beekeepers in training can catch them all by ourselves. The colony had chosen a fence post at Sylvia's and Pavle's enclosure as a resting place. It is an area that is almost impossible to reach, especially not the back of the post. All in all, it took us three hours to relocate the colony to a prepared beehive where the colony spent the night. On Wednesday we want to move it into our bee truck. 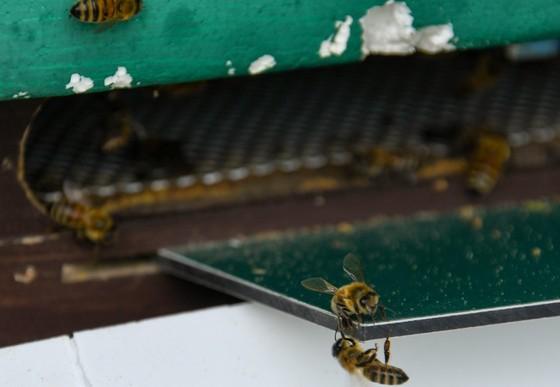 Where is the queen?

Another week has passed and we were once again on the way to the bee wagon with beekeeper Torsten. Today it was again a matter of looking through the frames one by one and seeing how our colonies are developing. According to our feeling, the colonies have grown insanely during the week. They were buzzing and humming away, honey was being brought in and queen cells (where a new queen is being bred) have already been sighted. Only the old queen was hiding from us. We couldn't find her in either colony. But maybe they are still a bit shy. 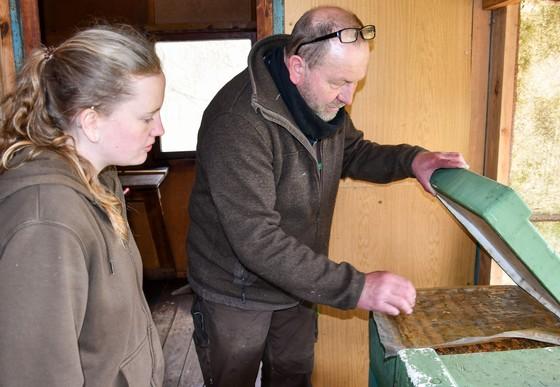 Today it was time to get down to business! A few days earlier, the first two bee colonies were brought to us and acclimatised to their new location. Today we had another lesson - only this time not with pictures, but with our very own bees. We looked at the bees one by one and saw the different stages of development of the brood, the pollen storage and the honey production. It's crazy how busy and crowded it can be in a hive like this. 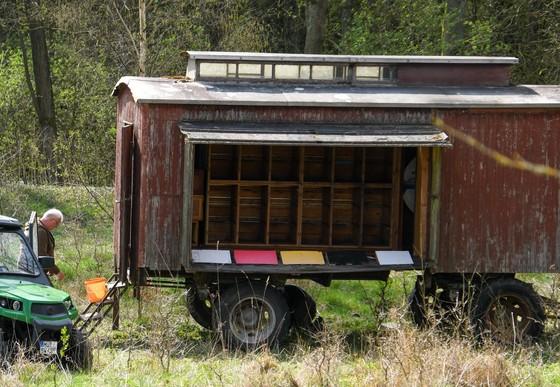 Oldie but goldie: Our bee wagon is coming!

About a month after our first introduction to the life of bees, our brand new acquisition arrived - a bee wagon. It may not look like much, but after being cleaned and spruced up, it's already giving a lot. Shortly after, our wagon was allowed to move to its final home. You can catch a glimpse of it from the street and also from the car park. 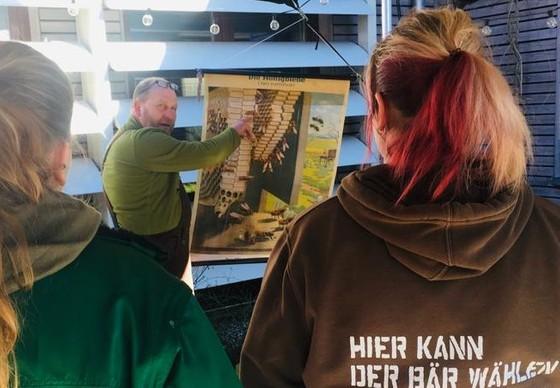 Beekeeping - how does it actually work?

Shortly after we decided to start with the project “Bear-Sanctuary-Bees”, our tutor-beekeeper Torsten came to teach us some theory. With the help of pictures, he taught us the basics of bee keeping and bee behaviour.